Workplace timing is often described as a fickle art.

A saying that is certainly ringing true for graphic designer Annie Rice (26) as she stares at the crumb on the chin of her coworker Shannon Matheson (28).

As the adjacent duo proudly tucked into an al-desko lunch, Rice noticed a crumb below the bottom left corner of Matheson’s chin while she was telling a story about a previous employee that was tragically, gossip-free.

Upon the conclusion of the story, Rice made to inform Matheson of the facial crumb but was interrupted by a fellow co-worker who acted as if she’d never seen a pork roll before.

“Aaaah! I wish this wasn’t one of my fast days, I’d love one without chilli!”

According to Rice, it was at this point she realised the crumb would likely be on her co-workers face until she died as it was far too late to say anything now.

“Karen had already seen the crumb on her face, the crumb I had neglected to mention,” stated a distraught Rice.

As lunch finished and the 12-hour workday recommenced, Rice hoped there would be an opportunity to tell Matheson about the crumb but passing time only seemed to increase the social pressure to act as if it was never her problem.

Relief for Rice eventually arrived during a visit to the bathroom wherein she noticed a crumb on her own face that had somehow settled between her eyebrows. 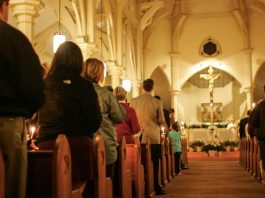 Catholic Church To Push Forward With 2020 Easter Celebrations Because Who’s Gonna Stop Them?