However, unlike Queensland, Tasmania stated it would actively turn people away rather than simply asking citizens from other states and territories to self-isolate for 14 days.

This has left the usually bustling Hobart airport looking like a ghost town, as airline staff and handlers have been sent home as part of the most recent wave of redundancies.

Each year, the Hobart airpot is home to over 2,000,000 passenger movements, making it the ninth busiest airport in Australia. It is particularly busy around the Winter Solstice, when the city’s tourism skyrockets as a result of the DARK MOFO festival.

However, it looks as though the annual tourism boost will not be happening this year, much to the joy of the Island’s Christian community who don’t like seeing those art installations and the upside down crosses – and would prefer to go back to the days where Tasmania was just known as a financially dependant Australian island of inbreds.

While the island is going to take an economic hit over the next few months, in some arguably good news – it seems the shutting down of the Cambridge terminals in Hobart’s North-East may just have resulted in the conservation efforts that were needed to help the Tasmanian wildlife repair itself.

Several airport groundsmen, who are lucky enough to be still employed mowing lawns on the runway boundaries, have reported seeing a growing population of Tassie Tigers now calling the foodcourt and baggage carousels home.

The Tassie Tiger, also known as the thycaline, was a carnivorous marsupial found only in the Tasmanian wild, before it became extinct after white settlement due to the intensive hunting encouraged by bounties.

But that’s only what they are telling you.

According to the Department of Primary Industries, Parks, Water and Environment, there have been eight unconfirmed thylacine sighting reports between 2016 and 2019, with the latest unconfirmed visual sighting on the 25th February 2018.

However, the most recent sighting in the Hobart Airport can be 100% confirmed – that’s if you believe the word of a 45-year-old stoner named Kai sitting on a ride-on mower on the roundabout at Grueber avenue.

“The place is full of em. Ask Braith. He seen em too. They are taking over the place mate”

“This isn’t like the Dolphins in Venice. This is real mate” 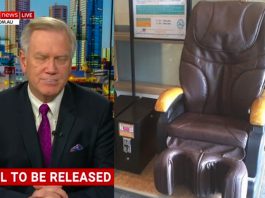