Local Betoota Grove CEO Lachlan Turnbull-Lowy (44) has today instilled some wisdom on the new sales grad whose just been hired at his family’s 4th-generation pharmaceutical company.

Before getting a job at ELITE PHARMA, Leroy Sheck (24) had only really worked at a second hand car dealership, as well as a brief job as assistant bistro manager at the Betoota Dolphins Leagues Club.

His new role, which is 18-tiers below Lachlan, sees him responsible for developing existing customer relationships as well as finding new customers for their loosely prescribed drugs they indirectly sell to poor people.

Little did he know, that tonight was the night that his 4th-generation CEO would be looking to find a wildly uninterested protegè to share some advice with.

Leroy, who only really took up the job until he can get his confined spaces ticket in an effort to land a gig underground on Betoota’s new cross-city tunnel, had only really turned up to staff drinks tonight to hammer the open bar before peeling off to see Chillinit at the Flight Path District Greek Club with his boys.

He never knew he’d be walking out of this shitty corporate small-bar with a mentor in the shape of a drunken Lachlan, who will definitely not remember this exchange in the media.

“You see the car I drive to work?”

“That can all be yours mate. You want the Aston Martin V8 Vantage?”

“Have it. It’s yours. You just gotta work your tail off like I did”

Leroy just awkwardly nods and chucks in an occasional “trueee” or “straight up” while destroying the free James Boags on tap.

In contrast, Lachlan is firmly glued to the Crownies, because he’s rich, and apparently deserves all the millions of dollars in his family trust. Because he worked hard for them – after his 70-year-old dad rooted an intern and had to stand down 18-months-ago.

“I’ve got an Olympic sized lap pool, 8 bedrooms up the top of Meninga Hill. You ever been up there?”

“You’ll have to come round some time for dinner some time. We’ll fire up some wagyu. I just installed an Infra-Red Four-Burner Gas Grill Unit. You ever seen one of them?”

Oh mate. Deadset. Come round. What are you doing tomorrow night?” asks Lachlan, making plans that will horrify him when he wakes up at 10am on tomorrow.

“I’ll tell the wife to head down to Sergios. He’s our butcher. Real high-end. You got a missus?”

“Oh mate, you’ve gotta meet my niece. She’s around your age. Her old man runs the dealership. That’s where I got the Aston. No mates rate though. Haha. But yeah. Happy to pay full price for that beast”

“But yeah, where was I. Oh yeah. Mate just keep your head down. This could all be yours one day. Deadset.” 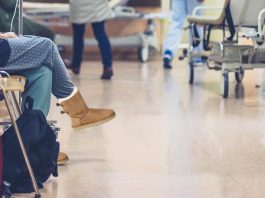