A newly-unwrapped drone has finally been lost forever after enduring a full 6 minutes of crashing into stuff, in what could be a new record.

The drone, purchased as a birthday present for 25-year-old Luke Poplar, featured a wi-fi camera, blinking lights and a number of other impressive feature which now only exist in the picture on the side of the empty box.

“I was stoked, man; I took it out of the box, charged it up and got a solid 6 minutes of crashing into the side of the house before a gentle breeze blew it over a fence,” says former drone owner Luke.

“My sister was like ‘what a waste of money, it’s going to be lost straight away’; you should have seen her face when she found out I got 6 minutes out of it”.

After scaling the fence, Luke briefly searched for the drone in a neighbouring yard in an attempt to squeeze even more mileage out of the long-lasting present but the drone was gone.

“Yeah, I had a quick look but it could be anywhere. All I know is that it went over that fence; it could be in a tree, on a roof, in a pool; who knows. I’m just cheering that I got so much use out of it. Plus I get a box with a cool drone picture on the side that I can use to keep the controller in”.

A cheerful Luke then left the interview to watch the drone footage which featured 6 minutes of close-ups of the side of the house concluding with a high-angle shot of the neighbourhood which ended with a close up of an unidentified Border Collie. 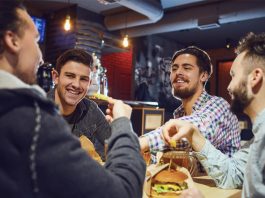