Local retiree Des Mangle was in for a rude shock when his 4th favourite fishing show was interrupted by wife Marie on Sunday.

“She’s butted in with ‘You’re not even listening to me now either; I don’t know why I even bother,’” said a confused Des.

“Which is a really strange way to start a conversation”.

“Then she started on about some sort of legal shit and gave me some stuff to sign and then the boys caught this huge striped bass with a flatwing fly and when I looked up she had left me. I still can’t believe it; a striped bass at this time of year!”

Des, who has been clinically diagnosed with chronic Selective Deafness, said he has not seen his wife since that day; noting her absence only after 48 hours without food.

“I don’t know, I think she said something about her Mum’s house? Sounds about right. Hey, check this new reel out. It uses special roller bearings so they reckon you can cast out 25% further. How good is that?”.

When questioned about whether he thought that the primary reason for his wife’s absence was the fact that his selective deafness disability prevented him from hearing almost anything she said, Des admitted it was possible.

“Yeah, I guess. I mean, when she … whoa, look at that, not bad! Good size too, bring it in boys!” he said, moving on his recliner to see past the two removalists who were in the process of carrying out an antique sideboard.

“She does get mad at me sometimes, but she always … hey, why are there removalists here?” 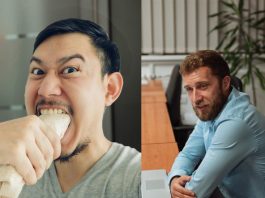