It wasn’t his first choice of drink, but Dustin Mulloway threw caution to the wind and treated himself to a John Candy’s Ventricle Blowout Pale Ale at the airport before he heads off to America tonight on business.

The popular craft beer is made locally and went on sale at the Runway Bar over at Remienko International Airport earlier this year to great fanfare.

However, it’s price tag has meant many have stayed away. Especially when there are other better, cheaper and normal beers such as Betoota Bitter on offer.

“First up, it was a bit hard on the mouth. Real bitter, or sour. I’m not sure. The bloke behind the bar said they double hop it or something. I just smiled and did that fake laugh thing people with limited social skills do like me,”

When asked by our reporter if he was going to have another, he did that fake laugh thing again and said absolutely not.

“I’m not made of money and beers like this aren’t sessionable. If I had more than four or five of these things, I’d need The Barefoot Investor to help me out of the debt and Charlie Teo to fix my migraine.” 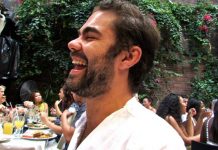