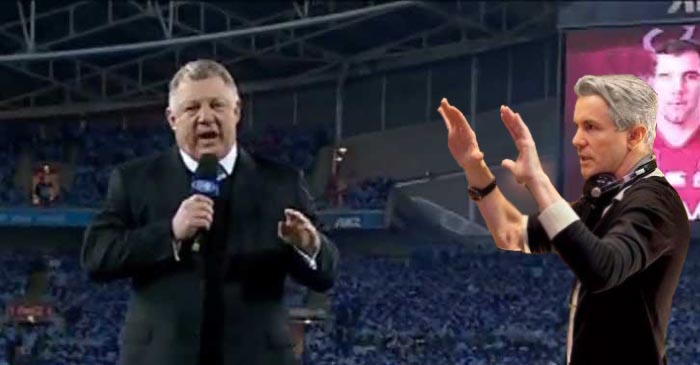 The NRL have today announced that they have enlisted the help of Hollywood blockbuster director, Baz Luhrmann, to help with commentator Phil ‘Gus’ Gould’s pre-State Of Origin monologue.

Known colloquially as the ‘Gus-Up’ – the pre-kick off rant has seen the husky former player and coach gradually earn respect from both sides of the Tweed – with his euphoric sermons that give viewers a last minute reminder of what Origin is all about.

After years in the wilderness, the iconic sermon is back!

Luhrmann says he’s very excited to finally be able to give back to the game that gave him so much joy as young kid in Sydney’s Darlinghurst.

“Anyone who knows me knows that I’m a degenerate rugby league fan” he said.

“And I’ve always wanted to find a way to work with the game. Gus Gould reminds me a lot of a young Leonardo DiCaprio. He is a true entertainer – and a true artist”

Gould says the rehearsals, which are currently taking place at Sydney’s iconic Belvoir theater, have him very excited about tonight’s performance.

“Baz is a natural director,” he said.

“We work very well together. He knows me, I know him”

“I just hope the NRL can see the merit in making this also a 3D production next year, like Baz and I requested”

“He’s really good at bringing the emotion into it. The Lana Del Rey backing track is going to work a treat”

However, like most Luhrmann productions, this project is estimated to run several hundred million dollars over budget as skeptics are beginning to question if it will make the May deadline.