Following the retirement of former Australian Of The Year and Indigenous AFL superstar, Adam Goodes, it appears that Collingwood supporters are rapidly running out of things to boo.

Collingwood FC, which have a proud tradition of incessantly booing of minorities, have now taken aim at the Islamic population of regional Australia by protesting with a banner at Friday night’s opening showdown between the Magpies and the Richmond Tigers.

The banner, which read “Go Pies! Stop the Mosques”, was held up below the MCG scoreboard by members from the Anti-Islamic movement the United Patriots Front, who also appear to be Collingwood fans.

Speaking to the Betoota Advocate today, UPF leader Blair Cottrell said the Islamaphobic slurs were a result of “Goodesy retiring”.

“We wouldn’t have done this if there was some cocky blackfellas still on the pitch, but, you know Goodesy retiring meant we needed to reassess our political strategy,”

“We thought, you know what? There’s plenty of country towns in Australia that are looking at having a Mosque built on the main street, so we thought we’d start booing Muslims.

“Hopefully they were watching,”

After successfully booing Adam Goodes into retirement, it seems the Collingwood supporters may also be able to boo Australia into no longer building places of worship for Muslim people. When asked what they would look to boo next, Blair Cottrell responded by saying “probably the Indians working on the gate,”

“This is Australia, mate.” 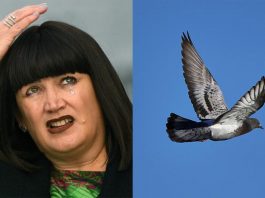