Australian news content is going to return to Facebook soon thanks to the Federal Government and the US social media giant making some sort of convoluted arrangement that benefits nobody in the long run.

The Government made some key amendments to the code and agreed to roll over somewhat after Facebook data showed millions of Australians never actually click through to the article, they simply read the headline then form an opinion before diving into the comments section to argue with people.

Josh Frydenberg spoke on the issue in Canberra this afternoon with some other damp tube sock in a suit. They outlined what is new in the code and so on but they just waffled for 15 minutes and didn’t really say anything.

Closer to home, The Advocate spoke to a local sexagenerian who welcomed the news because that means he can go back to threatening to run over other people in this town over minor disagreements that spiral out of control.

“Last time, it was over me saying I’d drive a star picket through Clancy Overell’s forehead until it came out the back of his head. Old Mark didn’t like that. Got three days in the clink for that. It was on an article he did about our 73-year-old Mayor getting caught drink driving. At least I think it was,”

“Without news on Facebook, I’ve been quite bored, actually. I get such a thrill telling people I’m going to beat their head in with a ball-peen hammer over something like a new disabled parking spot outside the new ALDI in the Heights,”

“You know, that Wendell Hussey too is on borrowed time. I was building a parcel bomb to send him but wasn’t sure how powerful I wanted to make it. I just wanted to blow his hands off so he’d have to type his hate speech with a pencil between his teeth,”

The Advocate reached out to Facebook and the Government for comment but as it was 4:23pm, they’d both gone home. 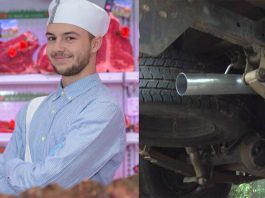