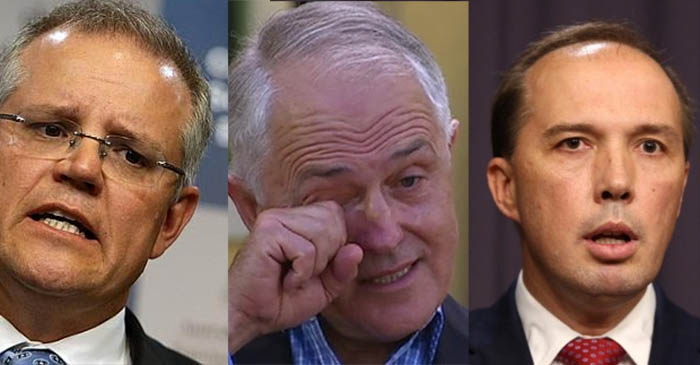 MALCOLM TURNBULL SPENT THIS morning sitting back in his chair, tossing a Turf King as close to the ceiling as possible.

He does this every time Scott Morrison and Peter Dutton fuck up.

More and more red scuff marks have appeared on the roof of his Canberra office recently, which is indicative of the fact that his Treasuer delivered a weak budget that’s alienated nearly everybody in the country and an immigration minister who’s less popular than throat cancer.

“You know, just once I’d like to open the newspaper of a morning and not spit my croissant across page seven because Dutto’s went and gone and said this, or that or whatever,” said Turnbull.

“I mean, this bloke and Scott are going to cost me my job. Bill Shorten won’t win this election, I’m gunna fucking lose it! And it’s these two peanut’s fault,”

“Mate it’s a hard gig this. I shouldn’t have promised these two such good jobs but I needed the numbers to roll the Mad Monk. But fuck me, this country has gone to shit and a lot of it is my fault.” he said.

Hitting back at Turnbull’s bleak outlook for the future, Peter Dutton said the Coalition has every chance at winning this year’s election, just as long as they stick to their core principles.

It’s quite the pickle for the peerless 45-year-old, who is scrambling to find a spot on Nauru for these people.

“Until the Baby Boomers die, we need to process asylum seekers offshore,” he said.

“What most people understand is that politicians are usually pretty normal people, it’s just the humans who elect them are not normal and need to be pandered to,” he said.

“The people who elect us are sick in the brain, so we need to do things like offshore processing and negative gear their properties to make sure we get a second term. Otherwise, we’ll have to enter the private sector like some toothless peasant, rather than retire.”