Well yesterday was the day, the day where most Australian men find a reason (outside of weddings and funerals) to wear a suit… and the day where women are expected to accompany them by wearing the ugliest head pieces they can find (but we must ban the burqa!).

Horses were whipped, people got drunk and a lot of young families around the country will spend the next week eating cornflakesfor dinner…. but still, I have in the past found it hard to condemn Melbourne Cup Day.

Despite my loathing for the institutionalised sexism and hedonism that comes with a day like the one our nation stopped for yesterday, I could not help but get involved. The idea of making quick money while looking sexy is enough to win over most.

The last twenty-four hours have seen a social media campaign like no other: #BANTHECUP 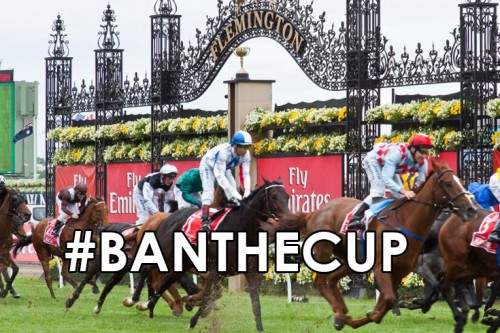 We have seen a few standouts in the world of ‘Hashtag Activism’ this year: #YesAllWomen was created to tackle misogyny in the wake of the Californian University shooting, #WeAreAllMonkeys which rose earlier this year to speak out against racism in sport after Italian soccer fans were seen throwing banana’s on the field at African sportsmen.

As successful as they all were, nothing can compare the popularity of #BANTHECUP – a hashtag campaign that international animal cruelty groups have been waiting to unveil for some time, they chose Australia because we are one of the maddest horse-racing countries in existence. that and the fact that we have thousands of international guests, entrants and sponsors. That and the fact that two of the favourites in yesterdays race were murdered in the process.

Admire Rakti, the Japanese-owned horse that was the pre-race favourite to win, pulled up in the final turn and died in the stalls soon after the race.

Hours later another horse, Araldo, was euthanised after breaking its leg in a freak accident just after the race, in which the horse was startled by a racegoer waving a flag and the animal got itself caught in a fence, breaking its leg.

This campaign has been organised by animal rights powerhouse PETA (People For The Ethical Treatment Of Animals), an organisation who has spoken out against horse-racing in Australia for many years now. The group have finally gained traction after years of tormenting both trainers, jockeys, owners and just about anyone who finds joy in watching horses race.

The following video was released earlier this week and has already seen around half a billion views worldwide. It is this video that has spurred celebrities worldwide into speaking out against this culture of western decadence and cruelty. It has won me over.

Will this uprising see the end of Animal cruelty on our racing tracks? I sincerely hope so. We have a lot to do yet but at least PETA and our international vegan communities have started the discussion.

One thing I can guarantee is that yesterday was the last day that Australia will ever celebrate ‘The Race That Stops A Nation”.

How did it get this far? where little children are seen parading next to the poor horses in the street? Where young men and women leave work to binge drink in hotels and blow their money on an archaic tradition?

Yesterday was the last day that this happens in our country, my country, your country.

If you disagree with my opinion, or the opinion of PETA – then you are part of the problem.

Professor Ingrid Doulton earned her PhD in women’s issues from the University of Sydney in 2012. She completed her undergraduate studies at La Trobe University in regional Victoria soon after completing high school. Immediately after, she began her Masters at The University of Canberra with her dissertation in women’s sport. She is chairwomen of the Women’s Literacy Foundation and a brand ambassador for Rexona. Prof. Doulton lives in Sydney’s upper north shore with her dog, Peter.