A young man without the world at his feet has today announced a sporting career change.

Jason Winston (17) has confirmed to friends and family that he’s not going to give Under 18s footy a crack next year, and instead make the leap across to field hockey.

The Year 12 student from Betoota Heights High said he has thought long and hard about the decision, and it hasn’t been an easy one.

“Yeah, getting shifted out onto the wing for the duration of the season isn’t appealing,” said the young man to The Advocate today.

“Not when your top speed looks like you’re on a treadmill at least.”

“At a certain point in your career you have to recognise that the writing is on the wall,” he sighed, taking a sip from a glass of water he brought to the brief interview.

“And it’s clear that my body is not going to be able to take the trials and tribulations of 18’s football, let alone men’s grade.”

“So, with that, I’m excited to announce that field hockey is the sport for me. Maybe with a bit of work I’ll end up at some Olympics down the track.”

“It’s my only chance of making it I guess.” 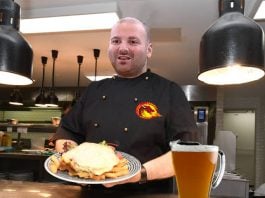