The already weird US Open* got even weirder this morning, after Novak Djokovic took responsibility for his actions, or tried to look as if he was at the very least.

The number one seed and odds on favourite to win the tournament did so after hitting an official in the throat with a tennis ball a few hours ago, something which got him disqualified from the match and the tournament.

He immediately went to the aid of the official, appearing to front up for causing someone to have respiratory issues- behaviour in stark contrast with his organisation of the ill-advised Adria Tour.

Djokovic helped organise the tournament which resulted in himself, players and staff testing positive to Covid-19 and causing an international storm.

While he apologised for that tournament the anti-vaxxer then labelled criticisms against him as a ‘witch-hunt.’

On this occasion, Novax Djokovic appeared to hit the ball with little anger and wasn’t looking where he hit it, but in the context of the game and given the consequences, the officials had no choice but to default him.

However, the fact that he appeared to be genuinely concerned with someone having difficulty breathing because of his behaviour has shocked the world more than the disqualification itself.

*The tournament has an asterisk next to its name given a raft of players like Rafael Nadal and Roger Federer decided it wasn’t safe or right to attend the tournament given the current state of the world. 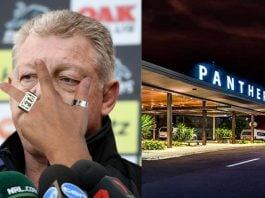